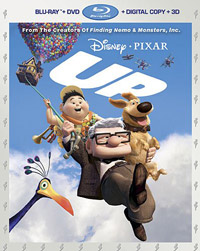 Bloggers were duped far and wide across the internet with original rumors that UP would be released on 3D blu-ray in the United States at the beginning of May.

May 1st came and went without any fanfare or home video releases from Pixar. With the recent rumors that Finding Nemo will be released on 3D blu-ray on December 4th, news has now surfaced that this will also be the case for UP. Entries for both UP 3D and Finding Nemo 3D have appeared on Amazon's site and are available for pre-order.

Amazon's pre-release pages are generally pretty accurate — definitely the most concrete evidence we've had in a long time surrounding these rumors. The release comes nearly 10 months after UP was released for the first time on 3D blu-ray in parts of Europe.