The Art of Brave — Too Many Uncertainties 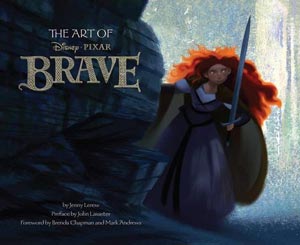 There have been several articles as of late from other Pixar blogs surrounding the Amazon debut of "The Art of Brave" book page. Should I have reported it when the news first broke last week? Probably. Why didn't I?

There were no facts. I, like the rest of you, clamor desperately for the deets on the "Art of" books. They are my favorite part of my book collection. But I was unexcited by the news because A) the initial release dates are almost never accurate and B) neither are the covers. Indeed, the very publication of this article is a digression from that position. Alas.

Amazon is notorious for its guesswork so they can throw up a page for publicity's sake. Typically, they just drop in the first day of the month they presume it will be released, as they have with this and previous "Art of" books.

It's a pretty sure bet that it will be released shortly before the film hits theaters. But exact dates are never certain until a few weeks before the launch. Since Finding Nemo, all of the "Art of" books have been released between 5 and 8 weeks before the release of the film. Until recently, when the gap has been shrinking with books for Toy Story 3 released 3 weeks prior to the movie, both UP and Cars 2 only two days before, and then the odd duck, The Art of Monsters, Inc. released the day before the movie.

It would appear that we can now expect these books to be released later, rather than sooner, as Pixar is undoubtedly trying to keep story points secret for longer. It's hard to keep all of that under the lid when the book publishes detailed colorscripts, storyboards and interviews.

The "Art of Brave" cover, shown above, and a release date of June 1st, 2012 are Amazon's current claims, but should be taken with enough grains of salt to cover your large bag of overpriced cinema popcorn on June 22nd when Brave hits theaters.

My apologies for the cheek.