Of Dragons, DreamWorks and Dingwall

Now that Brave is leaping into the Pixar limelight, with Cars 2 becoming old news, and especially the recent release of the full-length Brave trailer, viewers can't help but draw comparisons between Pixar's Brave and DreamWorks' How to Train Your Dragon . Some hard-core Pixar fans might take offense to this because they are two distinct films with very different stories.

I sympathize with the confused. On my DreamWorks favorites list (gasp!) How to Train Your Dragon ranks second behind The Prince of Egypt and is actually the only animated DreamWorks film I own (still waiting for the Prince of Egypt Blu-ray). That said, I've seen How to Train Your Dragon enough times that I'll admit having fallen to some of the similarities to Brave myself. I think the problem begins with misunderstanding the differences between the vikings and the lords: 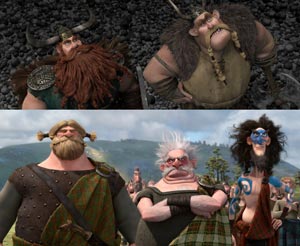 First, just look at 'em! The character designs of the vikings in How to Train Your Dragon (Stoick and Gobber, above) and the lords of Brave (MacGuffin, Dingwall and Macintosh, below) do bear blaring resemblances to one another. Large, burly men with wild hair, beards in braids and wearing tunics. They look like they could coexist in the same film. Sure, there still is some Pixar and DreamWorks flavor to the lords and vikings, respectively, but it's not hard to forgive the confusion on this point alone. 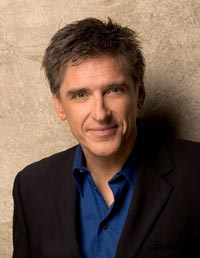 Second, Craig Ferguson. He voices both Gobber from How to Train Your Dragon and Lord Macintosh from Brave.

And last, they've all got Scottish accents. Though, that is only geographically correct in one of the films — Brave, which actually takes place in Scotland. Lords were powerful and wealthy land owners in medieval kingdoms. Vikings were explorers and pirates, known for sailing the seas and plundering land. They are almost always attributed to the great Scandinavian countries: Sweden, Denmark and especially Norway, though at certain points in history they were scattered across Europe, including the British Isles. So technically, the vikings of How to Train Your Dragon should have had Norwegian accents. But who the heck knows what that sounds like?