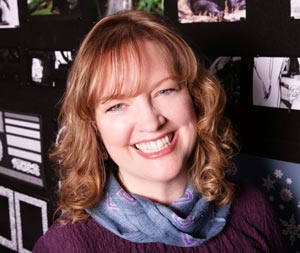 Yesterday we heard first hand from Brenda Chapman what it was like working on legendary animated films like The Little Mermaid, Beauty and the Beast, The Lion King, The Prince of Egypt, Shrek, Cars, UP and Brave. If you missed it, be sure to catch up by reading part one of the interview.

In today's second and final segment, Brenda discusses the inspirations, struggles and successes behind the development of Pixar's upcoming film, Brave. She also dispels some rumors, and talks about what we can expect next from her. Brenda is the brains behind Brave and was the original director of the film.

Where did the original idea for Brave come from?

Mainly it was inspired by my relationship with my daughter. I have this daughter who is very strong willed, very independent natured. We butt heads and we're both control freaks, but the intensity of my love for her is a constant thing. She was four or five years old when I came up with the idea and wondered, What the heck is she going to be like when she's a teenager? Well, now I know what she's like as a teenager because she's 12 now. She's such a huge part of my life that she's all I can really focus on, so I wanted to do a story about a mother and a daughter and what that relationship is like, the struggle. Like I said before, I love fairy tales and I wanted to do one that wasn't a spoof — something with contemporary, modern women and families. It wasn't just the mother and daughter, but a contemporary kind of family set in an old world fairy tale. I also have a soft spot for Scotland. I think it's mainly because I have some ancestry and a strong gene that pulls me to Scotland.

You spoke earlier of your affection for Belle because she was an unconventional princess. Did the appeal of the atypical princess have something to do with the direction you took with Brave?

I went in with that intention, but it also went with the story. The story was an atypical princess story. I love fairy tales, but I am tired of the message of waiting around for your prince to show up and you'll live happily ever after. Baloney! I was also getting tired of the spoofs on fairy tales. So I wanted to do one that paid homage to the old Grimm's fairy tales and get us back into that magical world. It's a whole different take on a princess. I knew a lot of people were going to say, "Oh great, another princess!" Because of marketing, little girls gravitate toward princess products, so my goal was to offer up a different kind of princess — a stronger princess that both mothers and daughters could relate to, so mothers wouldn't be pulling their hair out when their little girls were trying to dress or act like this princess. Instead they'd be like, "Yeah, you go girl!"

Is Scotland an integral part of the story, or was it more a stylistic choice?

It did have a lot to do with how we stylized the film. I originally had it set with a generic northern European feel, but we just kept honing it down until it we thought, Oh, to heck with it! Let's just say it is Scotland! I kept going back to the images from Scotland. I wanted Billy Connolly for the father. So we decided to stop beating around the bush.

This is Pixar's first film with a female lead. Pixar got a lot of guff for not having female leads for a long time. Did that have anything to do with Brave getting chosen for production?

I'm not sure about that. All I know is that I was invited to come to Pixar by Joe, and then it evolved into me developing a project. At the time they were trying to break out of the box. They had a lot of buddy movies and had great success with those stories. But I think they were trying to broaden their horizons a little bit. Like with Disney, I was in the right place at the right time. At Pixar, the directors create their own ideas from what's interesting to them, what their passions are. When they gave me the opportunity to come up with something, I wanted to make a film inspired by my daughter. Whether behind the scenes there was any pressure, I don't know. I never felt that.

Will we be able to see pieces of you in the film?

I don't know how they've taken the story recently, but when I was on it, I related to the mother character very much. I was always trying to pull on the truths of a relationship and not rely just on the stereotypes. I would pull things directly from my day sometimes. I'd come in and say, "You won't believe what happened to me this morning!" and sometimes it would fit really great. One morning, I was in the bathroom getting ready and my daughter came in and I said, "You need to hurry and get ready" "Why?!" she yelled at me and then I yelled at her and then we just stopped and hugged each other and said "Good morning" and then went right back to shouting at each other. I just had to laugh afterwards. When I told that story they said "Oh that's great! Let's do that." It was in there for a while, I don't know if it is anymore.

There were rumors floating around a few months ago about a change in leadership over the film. Could you clarify the confusion over what your current role is at Pixar?

I'm currently not on Brave right now. I do get to see screenings of it occasionally and I'm still employed by Pixar, but I'm developing some projects apart from Brave. There were just some creative differences.

With Monsters, Inc. there was fur. With Finding Nemo there was water. With The Incredibles it was humans. Do you feel that Pixar has conquered any technical frontiers with Brave?

Mainly I think you're going to hear a lot about the hair because it's part of Merida's character. It states who she is with this wild, unkempt, curly hair. I worked on The Little Mermaid, Beauty and the Beast, The Hunchback of Notre Dame and The Prince of Egypt and Ariel, Belle, Esmerelda, and Miriam should all have had curly hair but because of the pencil mileage, it would always get smoothed down to a slight wave. 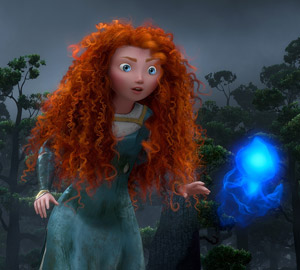 So I was determined with this character, because she had such a wild fire in her that this curly hair was part of her character and her design. It made a statement about who she was. They had tried to do curly hair back on Boo in Monsters, Inc. but gave it up because it was too much of a struggle and they were already doing fur. With Merida, they really worked hard on that challenge, conquered it and did an amazing job. Thank goodness they did! The whole world of Brave uses the same technology. They had to create hair because of the organic quality of Scotland with the grasses on the ground, the pine trees and the lichen. Everything has an organic quality and the technology they came up with for the hair really helped them with the landscape as well. It really blew the top off of making things look less plastic and have a life of its own.

What were the biggest story struggles you had to overcome?

Well, I think they're still struggling. The biggest thing for me at the beginning was simplification. I had a much more complicated story in the beginning and it evolved. We were finally able to hone it down to the simple bare bones of it to see what we really needed to go forward. We weeded out some characters and weeded out some complications to the plot. Original stories are the hardest to do and they're still working on it. I saw a version of the film a few months ago and it still had quite a way to go. But they'll get there, I have no doubt.

Is there any difference in how you animate a European character as opposed to an American one?

It's truly less about their nationality than it is who they are. Then you can put the little finesse of the country on it if you want but, it really has more to do with the individual character.

This is really the first time that a Pixar film has been directed by someone outside of the Pixar Brain Trust. What is the secret to maintaining a balance between staying true to the soul of Pixar and bringing something new to the table?

That's a hard one for me to answer. You have to follow your own instincts. To me, the spirit of Pixar was the creative drive, and the creative heart of the story. It's staying true to the creative process, and I think that's why their films have been successful.

What does the future hold for Brenda Chapman?

I'm not sure. Like I said, I'm developing some projects. Whether they'll be picked up or not, I'm not sure. I'm also looking to try my hand at writing a few stories. Whether that takes book form, script form, or both I'm not sure. If I stay at Pixar, hopefully something will happen there. I'm happily ok with seeing what comes. After six and a half years of being on one film, I'm enjoying the spontaneity of just seeing what happens each day, creatively. When I was on the film, I had no time whatsoever to involve myself in the 21st century and look at blogs, websites and social media. That's one thing that I'm getting involved in, and I'm really enjoying it. I'm still struggling to learn how to get to different places and to stay aware. But when I do stumble across something, I get very excited about it. I'm hoping I can be more involved in that new world. I know it's old school for you guys.