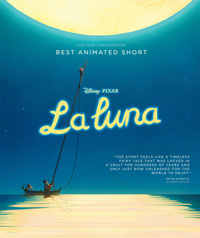 Pixar has begun its campaign to get La Luna selected as winner of the Academy Award for Best Animated Short. Enrico Casarosa's short was just recently announced as a short list contender for the Oscar. Final nominees will be announced on January 24th.

If I'm not mistaken, this is the first time Disney/Pixar has invested in print ads for one of Pixar's short films. In the past, they've only advertised for their feature films. The Cars 2 "for your consideration" ads made their debut at the end of November. With such stiff competition for Cars 2 at the Oscars this year, maybe Pixar is trying to generate a bit more momentum for the awards they are more likely to win.

Correction: Turns out I was mistaken. Enrico Casarosa himself offered correction. He can recall at least two other shorts getting the "for your consideration" treatment: Day & Night and Partly Cloudy. I jumped to conclusions when I was unable to find any info/articles about them.