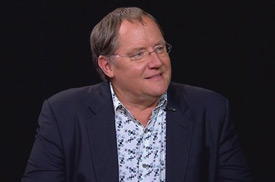 In an hour long interview with Charlie Rose on Friday, John Lasseter revealed some new tidbits about Pete Docter's next film that explores the mind. "Pete Docter, from Monsters, Inc. and UP, is doing a new film that takes place inside of a girl's mind and it is about her emotions as characters, and that is unlike anything you've ever seen."

Take from that what you will; just enough to get your imagination going, but vague enough to drive you mad!

There is, however, a fairly significant news item in the revelation that this film's protagonist is also female. It will be only Pixar's second film with a lead woman after Pixar's 14th film, Brave is released next year starring the Scottish princess Merida.

Thanks to The Pixar Times for breaking the story.