Early this morning Merida, Scottish princess of the clan DunBroch from Pixar's Brave, joined the ranks of crowned Disney princesses in a coronation ceremony at Walt Disney World in Florida. 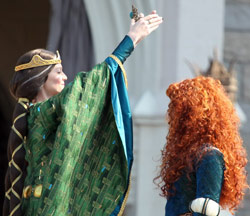 She was fittingly crowned by her mother, Queen Elinor during the ceremony in front of the Cinderella Castle. Joining her on stage were the other ten Disney princesses: Snow White, Aurora, Belle, Pocahontas, Tiana, Rapunzel, Mulan, Cinderella, Jasmine, and Ariel. The event was emceed by popular US olympic gymnast, Gabby Douglas.

A limited-edition, commemorative girls' T-shirt is available to remember this historic day by.