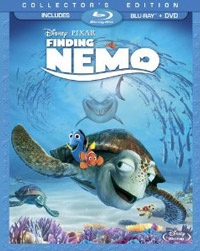 After a very long wait, the Pixar Blu-ray collection will finally be complete on December 4th, 2012. That's right. Finding Nemo, the film that broke records as best selling DVD of all time, will soon be available on Blu-ray in a few short months.

The popular film, written and directed by Andrew Stanton, and recipient of the Academy Award for Best Animated Feature, will be available in two varieties: a Blu-ray + DVD pack (an entry for which is already viewable on Amazon), or a 3D Blu-ray + 2D Blu-ray + DVD + Digital Copy edition. A new, re-rendered 3D version of the film will be released for the first time to theater audiences on September 14th, 2012.