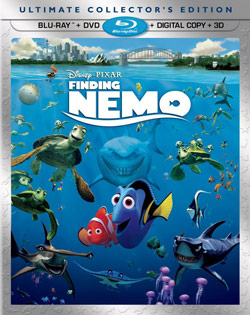 At a recent exhibition of upcoming Disney merchandise, a blogger snapped and published some photos of the upcoming Finding Nemo blu-ray case. The front features images of all the major characters, but the back is more valuable and revealing.

Finding Nemo will finally be released on blu-ray and 3D blu-ray on December 4th of this year along with the also long-awaited 3D blu-ray for UP.