As I've been listening to the Brave soundtrack, which was released for purchase today, it strikes me as a very welcome departure from what we've heard from Pixar soundtracks over the last couple decades. 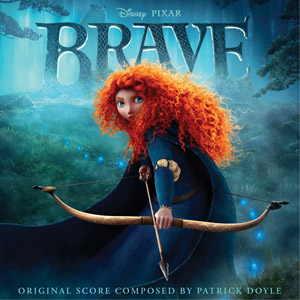 There have been so many dazzling soundtracks composed to accompany Pixar's thirteen films, and it's a real delight to have such a different collection of music added to the mix. A different sound might well be expected; this is the first time Pixar has looked outside its three go-to composers for a new score. Patrick Doyle, with his Scottish roots, delivers a very authentic sound. Fiddles, banjos and bagpipes lead many of the tracks to add the Celtic flair so prevalent throughout the soundtrack. Celtic music can be a polarizing genre, and caters to a very particular niche, but this soundtrack has some of the most appealing Celtic music you'll find anywhere.

The guest tracks from Julie Fowlis, Birdy, and Mumford & Sons are very charming and bring just the right amount of contemporary panache to the mix to make it exciting and relevant to modern ears. A couple additional tracks may catch you by surprise, because Pixar isn't known for musical numbers in its films, but two songs, one sung by Billy Connolly (King Fergus) and one by Emma Thompson and Peigi Barker (Queen Elinor and Young Merida, respectively) are clearly sung in stride and in character. While they're not the most vocally correct tracks on the album, they do not feel out of place with the feeling of candid sincerity they lend to the album.