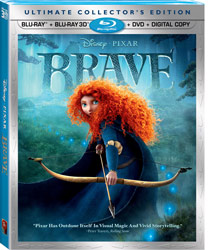 Blu-ray and 3D blu-ray combo packs for Brave were recently made available for pre-order on Amazon. I added links to them last night on the Brave page, but I figure it also deserves a mention on the blog, especially since there hasn't been much to talk about the last couple of days.

Nothing is said of an official release date on the pages, but there are a couple reasonable possibilities. Pixar's summer release films are almost always released in the first half of November, the majority of which fall on the first Tuesday of November. That is the tentative estimation in the Pixar Portal countdown timer in the sidebar. Both UP and Finding Nemo are slated for 3D blu-ray release on the 4th of December. That date may also be a possibility, but Disney may be hesitant to overwhelm the pocketbooks of Pixar fans with 3 large, relatively pricey 3D blu-ray collections to buy all on the same day.