Brave For Your Consideration Ad No. 1 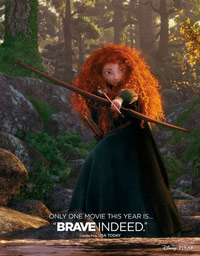 The awards season must be upon us once again, as indicated by the public release of a “For Your Consideration” ad for Pixar's 2012 flick, Brave.

Studios often publish these kinds of ads in media outlets likely to be seen by members of voting bodies of awards shows, most often the Academy Awards. Movies released earlier in the year are sometimes forgotten, so the studios try to find discreet ways of keeping their films at the forefront of voters' minds. Brave will almost certainly receive a nomination, but with the recent surge in high-calibur animated films, the competition has been awfully stiff the last few years. This year is no exception.